Joint weather information for water management in the Netherlands - Delft-FEWS

Joint weather information for water management in the Netherlands

The Dutch regional water authorities, represented by Het Waterschapshuis, jointly developed a national database for storage and dissemination of meteorological data. Its purpose is to enable a single source of information to be used for hydrological forecasting and water management. It is referred to as WIWB after a Dutch acronym for “Weather Information in Water Management”.

WIWB contains meteorological observations and forecasts based on meteorological gauges, meteorological radar data and numerical weather models. The WIWB database is based on various technologies including HydroNET. It is jointly owned by HydroLogic, HKV and HydroConsult. Retrieval of data and metadata is supported by a REST API.

The operational data is provided through a web service that can be accessed by any Delft-FEWS application including those operated by the water boards. Much of the data is gridded with high resolution in both time (5 minutes) and space (1x1km), causing potential bandwidth issues due to data volumes. For that reason, the import feature in Delft-FEWS has been extended to know which data has been imported already. Only data that is new to the application, is requested and downloaded from the web service. This efficiency enables a high frequency import run to ensure that the latest information is available to the user shortly after it has been included in the database. It also enables requests for aggregations of data, both spatial and temporal.

The WIWB also includes a new, cross border International Radar Composite (IRC) which has recently been developed by the Dutch meteorological institute KNMI. The IRC uses the two available radar stations from the Netherlands, as well as the ones from Germany and Belgium. Thus, border regions can benefit from multiple sources of radar, resulting in improved, near-realtime precipitation estimates.

More information can be found at https://publicwiki.deltares.nl/display/FEWSDOC/WIWB 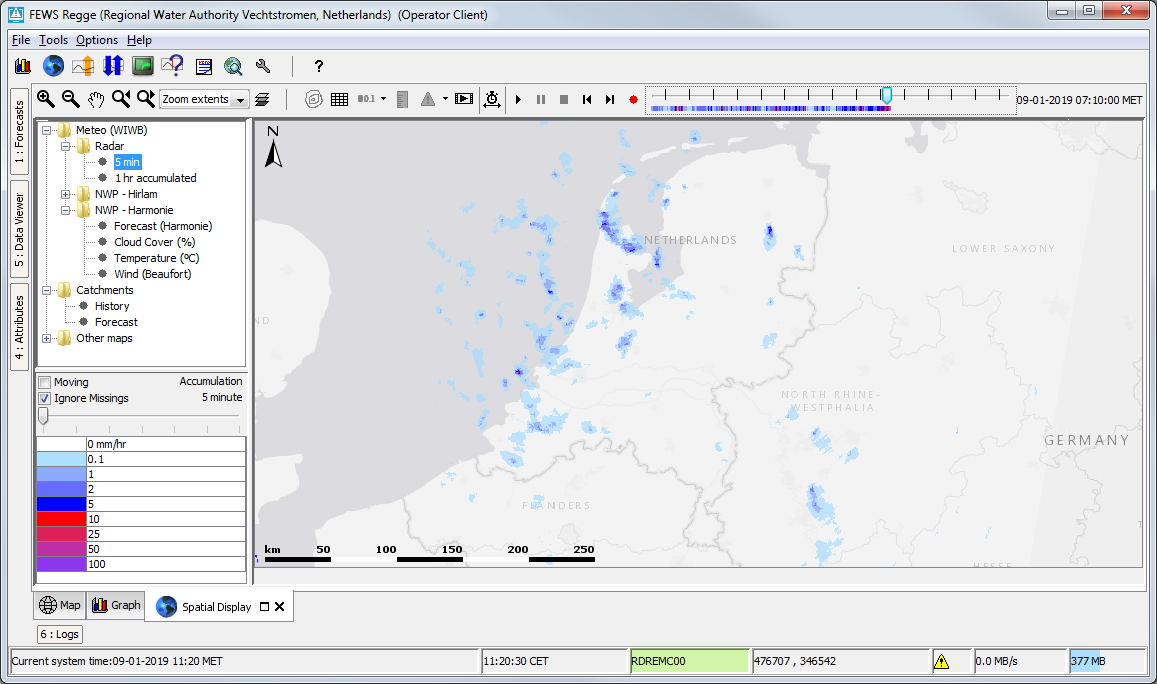