The potential application of the OpenDA-WFLOW for operational hydrologic forecasting including its integration with Delft-FEWS is currently being demonstrated in the operational global flow forecasting system GLOFFIS running at Deltares with focus on Europe (in the already mentioned H2020 IMPREX project). Using for instance the grid display, the end-user is able to see and follow what model states are adjusted and in which direction.

In the H2020 IMPREX project, the OpenDA-WFLOW framework will be further tested for improving real-time hydrologic predictions of discharge (and water levels) of the Rhine river using the DelftFEWS system RWsOS Rivers operated by the Dutch Government for the Rhine and Meuse. More tests of the OpenDA-WFLOW framework embedded in Delft-FEWS are on their way in the forecasting system of the Basque Water Agency (URA) in Spain that is being set up in a joint project of Deltares and the engineering firm SENER.

A manual and a scientific peer-reviewed paper are in progress. OpenDA is an open source initiative (www.openda.org) from the OpenDA consortium, Openstreams/WFLOW is an open source initiative from Deltares. Note that catchment scale application of an earlier version of OpenDA-WFLOW embedded in Delft-FEWS where published by Rakovec et al. (2012, 2015).

The image of this news item shows an example of ensemble flood forecasting including data assimilation using OpenDA-WFLOW framework running in the global flow forecasting system GLOFFIS at Deltares (currently using EnKF with 64 ensemble members) for Europe. The gray lines indicate the one-day-ahead forecasts; the black dots indicate the analysis (situation after assimilation and start state of next one-day-ahead forecast); the green line is the model without assimilation; the red dots and line are the hourly and daily measured discharges of the Rhine as published by RWS. 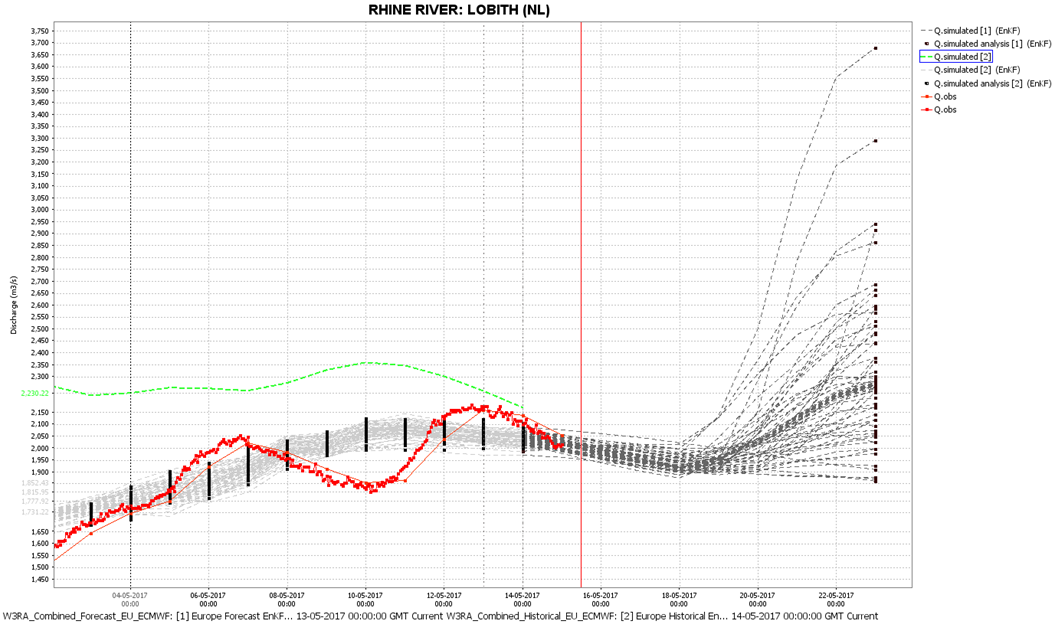