I just started working with Delft3D (it is fantastic that you are making parts Open Source). I've compiled the most recent open release that includes WAQ, but as far as I can tell, only D-Flow is included, but not D-Flow FM. I also have the latest corresponding GUI front end, and it does seem to support unstructured grids, but it does not seem as advanced as the orthogonal grid tools (at least as far as I can tell).

I gather that D-Flow FM will be added to the open source release. Is there any estimate on the release time frame yet?

The estuarine system I'm modeling is rather difficult to capture using only curvelinear grids. I've attached an image of the geometry I'm working with. I'd have to add and attach several curvelinear grids to the river grid in order to capture marsh flooding and drying. While it would be possible to do so, it would be a huge effort to do it for the entire estuary (image is perhaps a 50th of the whole system). 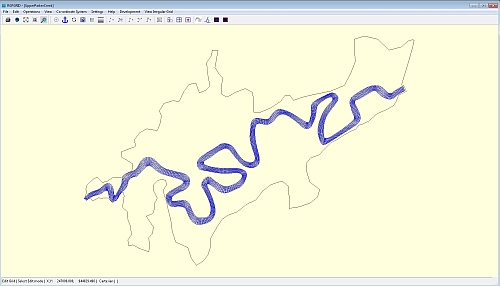 Since using a FE grid would be much easier, I would hold off on trying to use curvelinear grids if D-Flow FM would be released sometime in the near future.

Thank you for your interest in the new D-Flow FM software.
The upcoming April release of RGFGRID will offer more functionality for generating and manipulating flexible meshes.

Indeed, we're already making the first steps for our open source release. This is not so trivial as our people are still developing full time on large new functionalities, such as 3D flow, scalable parallellization (MPI on (Linux-)clusters), SWAN coupling for wave modelling, OpenDA-calibration and more.
More details will be announced probably around this summer, and definitely before the Delft Software Days 2013: http://www.delftsoftwaredays.nl/
In the meantime, some of our senior advisors have started a couple of pre-open source pilots with several selected parties around the world. Also, the results of these will be presented in the second half of 2013.

Judging from your screenshot, that's quite an extensive model area that you're constructing. Interesting; where is it and what do you intend to study?

Good to hear that an open source release for D Flow FM is in the works (as well as the other components you mentioned, such as MPI, which would also be great).

The site I'm working on is part of a NSF funded Long Term Ecological Research (LTER) project. The LTER's (see http://www.lternet.edu/) form a network of sites of which Plum Island Ecosystems (PIE) is one of currently 26 in the US. The PIE site is located in Northeaster Massachusetts, US, and is a land margin ecosystem, which encompasses meso-macro tidal estuary (see http://pie-lter.mbl.edu/ ).

We have used FVCOM to model the estuarine hydrodynamics, but I'm also interested in exploring Delft3D as well.

Youngling Posts: 0 Join Date: 3/6/12 Recent Posts
00
hi Arthur,
i am eargly waiting for new RGFGRID which has D-flow FM software. please when it will released, please inform me.

using the latest Delft3D FLOW Version with the GUI Version 4.01.00.rc I tried to build a flexible mesh model for test purposes. Then I noticed, that the new *net.nc grid files can't be opened with the FLOW GUI of the mentioned Version (which is Delft3D-FLOW GUI Version 3.43.05.22651).

My question is, is there an updated Version of the FLOW GUI and do I have to compile it first and are there any manuals for the new FM tools in the meantime?

Thanks in advance.
Patrick

True, the FLOW GUI of Delft3D does not yet support flexible meshes (unstructured grids). Currently, we have been developing new functionalities in RGFGRID to generate unstructured grids. The open source release of this new RGFGRID is expected medio september 2013 on the open source website: http://oss.deltares.nl/web/delft3d/source-code and medio october for service pack users. We are currently working on further development and testing of the flow functionalities, but that will not become part of the Delft3D FLOW GUI this year.